Significance of Elephant in Hinduism 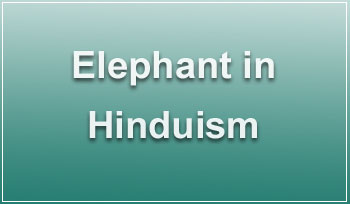 Elephants are considered as holy animals, and they would be found in temples, zoos, and forests. Though they are classified as wild animals, in general, they would not harm others.

Only if they get some problem in their physical or mental health, they would try to attack others.

White elephants are very sacred, and it is found mainly in Thailand and Burma, and it represents good luck.

Temple elephants would be properly tamed, and they are given only strict vegetarian food consists of greens, sugarcane, plants and lot of vegetables and fruits.

Elephants living in forests sometimes would get scared with lions, tigers and would run away from their sight.

Elephants are very favorite animals for small children. They would eagerly watch its appearance and jump with great joy, and they would offer some money to the temple elephant, and in return, they would get the blessings from the elephant.

The sanctity of elephants had been mentioned in various Puranas, Vedas and in other holy texts.

It is believed that those who take care of the elephants, and offer food and Water to them regularly, after their death, they would reach the Ganesa Loka, or they would live in the Indra Loka, by enjoying all sorts of comforts and pleasures.

According to legend, once an elephant named Gajendra was struck under the clutches of a crocodile when he was bathing in a lake.

Due to heavy pain, it began to worship Lord Vishnu, and plucked a lotus flower from the lake and raised it in the sky, as an act of offering his prayers to him.

Immediately the great Lord Vishnu, approached and relieved him from the clutches of the wild crocodile, and also granted SALVATION to the holy elephant Gajendra.

Let us worship the divine elephant Airavata and the first god Vinayaka and be blessed.