Michigan, a beautiful state in USA. We have many clients in Detroit. A place where the cold waves and ice fall in winter are common. Exciting for newcomers, tired to the locals. USA a land of development. This is one part of the scene, the other part is extremely painful.

When we observe the factories which are not functioning and many buildings were vacant, which gives us pains. This is the situation in the year 2014 and 2015 as per information received from different sources. The present position may vary. God Bless Michigan and USA. We are looking for everybody happiness and peace here. Be safe in your life.

Michigan is very near to Canada. People are soft and respectable. Somewhere if we see the parts of Michigan, there may not be boundaries with Canada, particularly in the water. The water channel has been divided into two portions, one is USA and another part is Canada.

Almost all homes had a basement in Michigan state. When there is a basement, one should be careful while going to buy East facing homes and North facing homes.

Is the land has iron-bound or mountainous then check where are they, in which direction? Please note that the mountainous land slopes towards West or South may not be auspicious for the happy living. Need to thoroughly check, here one vastu pandit can definitely help.

Please observe about the home terrace straight sloppy structure, if so in which direction that sloppy provided. Is East or North then no problem, otherwise need to check that property with one of the best vastu consultant. He will check properly and guide further.

Don't approach charlatans in the society. Their payments will be always cheap, once residents approach them,  thereafter they will show what they are. Don't spoil the life by saving the minimum vastu consultancy service charges. Contact only vastu experts, they will guide properly.

Michigan is a US state located in the Northern part of the country, on the Great Lakes region. The state is known for its abundant water resources, lakes, automobile industries, and diverse landscape. Also, out of five Great Lakes, the state is bordered by four of them. The state has a population of over 10 million and is 10th most populous US state.

Human settlement in the region dates back to approx. 11,000 BCE. As the time passed, several other tribes from different region settled in the region. These people were basically hunters or knew basic farming. Some of the conflicts also occurred between the time to time.

French were the first Europeans to explore and settle in the region. Several settlements and trading posts were built to trade “fur”, especially with the Natives. French also built several forts to strengthen their presence and maintained the hold of the region until their defeat in the “Seven Years War”. Afterward, the region was annexed by the British. The region remained a British territory until the “American Revolutionary War”.

Again, during the “War of 1812”, the British re-occupied the region and made huge supply chains in the state. During this period, the region saw some of the bloodiest battles in its history e.g. “River Raisin Massacre”. Similarly, during the American “Civil War”, the state contributed much, as it sent almost forty regiments to participate in the War.

In addition to the four Great Lakes Michigan borders, it has approx. 11,000 inland lakes and ponds making it the state with largest freshwater reservoirs in the country.

The bordering states of Michigan include Ohio and Indiana towards the South, Wisconsin towards the West, while it shares water boundaries with the states of Illinois and Minnesota. It also borders Canadian province of Ontario towards its East.

The four great lakes that Michigan borders include Lake Erie, Lake Huron, Lake Michigan and Lake Superior. The upper peninsula of the state is densely forested. Other features include long shorelines, rivers, plateaus, and islands. In addition, most of the environmental and natural areas are protected by the government. There are 78 state parks with several other protected sites.

The economy of the state is diversified, but the state is famous for its automobile production as the US largest three automobile companies Ford, Fiat Chrysler and General Motors are situated in Michigan.

Major economic sectors include industrial outputs, aerospace technology, IT products, mining, agriculture, food processing and military hardware. There some of the leading research centers in the state and some of the top Universities. Also, there are 38 deep water ports in the state. Due to fertile lands and abundant water resources, agriculture is thriving in the state from the beginning.

English is the major language of the state, while language other then English include Spanish, German, Chinese, French, Albanian, etc. Christianity is the predominant religion of the state which is further divided into several sects. Minority religions include Islam, Judaism, Buddhism, and Hinduism. 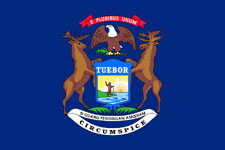 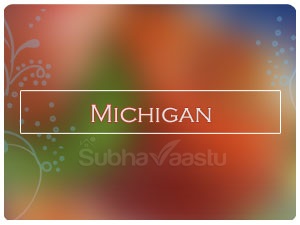