Vastu shastra, an Indian ancient traditional construction system which brings us peace and development in our life. Some thought that following Vastu is not worth to get the expected results. This is a myth. Once we followed the exact principles of vastu shastra there are 100% chances to get good results.

Even the ordinary home buyer which he wishes to buy a home for a price of 150 thousand USD also looking for 200 or 250 USD consultants. Mingy and parsimonious residents also never care about genuine vastu experts piece of advice charges. While it is so one vastu consultant in Cincinnati told us, he is migrating to New Jersey as he is not getting any consultancy in Cincinnati city. He told us that, many residents asking him to visit the properties for a price of 25 USD, god only knows the fact.

If a home is coming for 2500 USD, can you doubt on that property or rush to buy it? why some residents are looking for 10 / 15 USD Vastu consultancy in the society. By observing their tendency, some so-called vastu specialists ready to provide them only for 10 USD consultancy and later they are dragging unbelievable payments in the name of Yantras or mantras.

Once a resident selected one genuine vastu pandit, then there is no chances of getting pains and no need to point out on Vastu shastra and its caliber and working capacity.

Intelligent and educated residents never choose the cheap vastu consultancy services, they know the value of their properties. It's the reason they are having a safe life journey. They never say vastu won't work. Because they prefer only the right path and following procedure.

We provided a lot of free vastu shastra consultancy services to many sections of people in the society. We are doing our best from the year 1992 to make this society more beautiful and filled with peace and love.

Beware of a basement in the homes in this Ohio state, some residents are rush to buy the East facing homes or North facing homes, if so they should need to rethink once. Without proper vastu consultation, one should not buy the home in Ohio state.

Observe where is the garage is coming either Northeast or Southeast for East facing homes. For North facing houses, observe the garage position either towards Northwest portion or Northeast portion. Many thought that Northeast garage is bad. Please, we should note that exact Indian vastu principles were not matched to USA properties. Some vastu tips have variations in USA homes.

Is your home has straight slanting roofs, if so on which direction the roof has the leaning? , if the slanting has towards West from direct East then resident has to re-think of buying that property. The partial propensity is inconsistent and full slanting is medium offbeat.

We have plans to provide the best in vastu shastra techniques for Ohio state NRI's. Within a very short time, we will upload the content with all related images.

When planning to buy the Skewed properties, without expert vastu consultant advice, don't buy it.

When the plot is facing Southeast, then take the measurement of that plot and the plinth area measurements, including each room. Generally, the expert vastu specialist never asks you the measurements, he will rapidly attain to one decision after inspecting the floor plan.

When a house is facing towards Northwest, then do the same above practice to understand better of the plot and home floor plan.

If anybody is planning to start an office, observe what is the main entrance door and what is what about the neighborhood of such property. Is this office is in a building or it's an independent property? Is it has 2 floors or 3 floors or the single floor. Need to observe many things.

Ohio is a midwestern US state located in the Great Lakes region. The state was admitted to the Union on 1st March 1803, as the 17th US state. Ohio is 34th largest in terms of area and 7th most populous US state.

The state is named after the “Ohio River” and is known for its beautiful cities, museums, European and Asian art collection, National parks and ethics.

Archaeologists and Historians estimate that the region was inhabited approx. in 13,000 BC. “Nomadic people” were the first to do so. These people disappeared or migrated soon and were replaced by “Adena cultures”. These people built proper villages and relied on hunting and farming e.g. corn, sunflower, etc. Later, many other cultures also evolved in the region like the Hopewell people, Mississippian culture, etc.

In the middle ages, some of the know tribes were Monongahela Culture, Fort Ancient people, and Whittlesey Focus people. Majority of these people died due to European arrival and in fact, the diseases they carried. French were the first Europeans that made permanent settlements in the region. Also, they built trading posts to trade fur, etc. with the natives.

By the mid-18th century, French and Britain got involved into war, most notably the “Seven Years War” and afterward, French ceded their territory including Ohio towards the British. The British sovereignty over the state remained until the “American Revolution” which resulted in the withdrawal of British from the American regions. After the region was annexed by the United States, it remained as the “Northwestern Territory” till the start of 19th century, when it was finally granted statehood. Afterward, Native Americans were also forced to leave their homelands and settle in the reserves.

Ohio has great geographic and strategic importance. The bordering states of Ohio include Kentucky towards the South, Michigan towards the Northwest, West Virginal in the Southeast, Pennsylvania towards the East and Indiana towards the West. Some of the common geographic features include mountains (most notably the “Appalachian Mountains”), plateaus, rivers, and plains.

If Ohio was a separate country, it would have a 21st largest economy in the world. Major economic sectors include Industries (chemicals, robotics, aerospace, engineering, automobile, iron, steel, rubber, pharmacies, etc.), Agriculture, food processing, mining, and services. Some of the common agricultural products include tomatoes, cheese, grains, and soybeans.

The largest ancestry groups in Ohio are German, Irish, English, Italian, Polish, French and Scottish. English is the major language of the state while in terms of religion, Protestant and Catholics (both are sects of Christianity) are the largest religions of the state. Minority religions include Mormons, Buddhists, Muslims, and Jews. 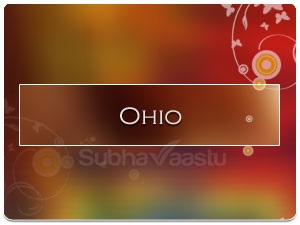