East Timor, authentically the “Democratic Republic of Timor-Leste” is an independent country is Maritime Southeast Asia.

The country comprises of the eastern half of Timor island and the neighboring islands of Oecusse, Atauro, and Jaco. The country poses a long-term history of colonial occupations, tensions with bordering Indonesia and political instability.

The country is one of the two Christian dominant nations in the region, the other one is Philippines.

Human history in the area is traced back to as early as 42,000 years ago. The people were mostly migrants that came from South China or Indochina as per the historians.

In the middle ages, the region was known to Chinese, Indian and other regional traders as the area was essential for producing wax, honey and exporting slaves. In the earlier 16th century, Portuguese maintained trade relations with the island, maintained outposts and swiftly colonized it.

As the World War II broke out, the Japanese forces invaded the islands and Portuguese and other allied forces in the area were either driven out or they surrendered.

At the end of World War II, Japanese forces all over the region surrendered to Allies and Portuguese reign was restored in the islands. The Portuguese maintained their presence in the country till 1974, when the Portuguese Revolution started and the colony was abandoned.

Following the withdrawal of Portuguese, clashes between the democratic and communist parties started in the country which was followed by Indonesian occupation of the country and declaring it a province of Indonesia.

The Indonesian occupation period is one of the dark and brutal periods in the history of the country as millions of people were killed or massacred and infrastructure was destroyed including power grids and schools. Finally, the UN interacted and the country was given back its sovereignty.

The country’s geography is featured by dense forests and mountains. The highest point in the country is Mount Ramelau.

The eastern part of the country features some lakes and the country’s only natural reserve known as “Nino Konis Santana National Park”. Much of the wildlife of the country is protected by this reserve some of which are endangered.

The Indonesian occupation period still haunts the country as much of its infrastructure was destroyed and is recovering slowly. This is the reason the economy is still not recovering and is ranked as the low-income economy by the World Bank.

The most dependent sectors of the economy are Services sector, agriculture, and industries as of 2005. One of the main agricultural product is “coffee” which is one of the largest export product.

The island is producing some best quality coffee beans and one of its largest buyers is the famous “Starbucks”.

Portuguese and Tetum are the official languages declared by the government. Some of the other commonly spoken and indigenous languages include Mambai, Makasai, Tetum Terik, and Bunak.

The religious statics are not official but it is estimated that almost 99% - 100% of the total population are Christians. 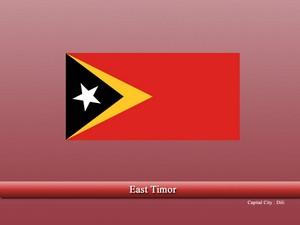 Back Dominican Republic Of Congo
Next Ecuador
Add comment
JComments