Many Thanks to "Heather L", San Diego USA for initiation to publish this article here. 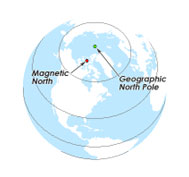 North-South directions: Generally we take the axis of North pole and South pole as absolutely correct. We also take where the Sun raises as East and where it sets as West. This East-West axis is exactly perpendicular to our presumed North-South axis.

As a matter of fact if you extend in space the North-South axis towards North into the cosmic region it hits the Pole star. This is not actually magnetic North-South axis.

We will see from the vastu point of view the magnetic North and true north if they can be taken together do not matter. The difference between true north and magnetic north becomes important for navigational purposes and not for vastu.

Because of wobbling of the earth, causing seasons, North is taken as 47°. Consequently, all the principal directions that is West, North, South and East are 47° each. The four corners of the plot would thus be 43° each.

If you take say, the East side of the plot (for simplicity sake we are assuming the plot to be square shaped) the middle 47° would be the East, 21 ½° towards North is half of Northeast and the other 21 ½° towards South is half of Southeast. Similarly all other directions.

This difference becomes relevant for airline pilots and Captains of Ships etc. They refer to the magnetic north always and apply relevant corrections to come to the exact location.

This is a routine matter for them for which there are suitable automatic equipment. In vastu shastra this precision is not required, we are dealing with abstract forces that influence the psyche of the residents. As such we ignore the difference between Magnetic and True north and proceed.

In any plot for marking directions proceed as follows. It is presumed that the plot is rectangular or square, for other shapes and complications consult a competent scholar.

Join the midpoint of one side with the midpoint of the opposite side. The intersection of these two lines is the geometric center of the plot. This is called the Brahmasthan / center point. Place the magnet parallel to any one side and see how much the North-South needle as shifted.

Mark that line passing through the Brahmasthan in our diagram. 90° to that line draw the other line, we have got North-South line and East-West line.

We have indicated earlier that each principal direction is of 47° total. At this geometric center point of the plot, mark 23 ½° on either side of North South and East West lines. You get an amount of East, West, North, and South. The balance is for the 4 corners each corner being 43°.

How to plot the directions of a plot:

In vastu shastra, we take magnetic North for reference. One must understand that there is a significant difference between magnetic north and true north.

We all believe that Sun rises in the East. This is alright in the primary stages.

For discussion sake, we are taking a square regular plot the same argument being presented is relevant for any plot under discussion.

The geometric center of any plot whether square or rectangular is otherwise called Bhahmasthan.

Put the magnetic compass at the geometric center of the plot under investigation on the center. Mark the North, South direction correctly.

Draw a line perpendicular to this North-South line, you have got now all the 4 directions, that is North, South, West, and East. One vastu consultant in California expressed his views that vastu is not working in North pole, it may be fact, because we never used to visit there. Or we did not come across anyone who visited there for vastu consultancy, actually who is living there. When we are discussing with one vastu consultant Texas in a casual meet in Dubai, he stated that, planning to round trip to the Greenlands. We expressed our gratitude to find out the facts of distance places vastu perfection and interaction with human being progress.

This Link is under construction.

Many residents asking us is south facing home good or bad, can expect the answer in the same link.