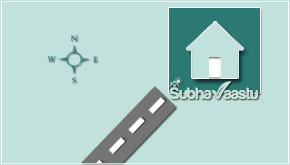 (Southwest or Nairuthi veedhi /veedi drusti/dristi) This Southwest means it includes South and West, both directions should not be open or should not get free air or free focus to the properties from SW direction.

Honestly speaking the house or the property should be covered from South and West parts including the Southwest then it would become standard. Otherwise, weakness may be seen in terms of health and wealth, etc. 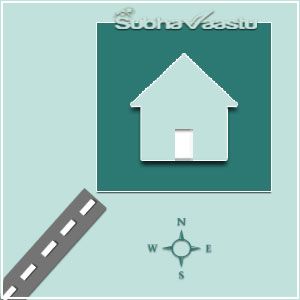 This street thrust leads to chronic diseases to the female members or some times to the male members also. Most of the owners lost many business losses and has to face financial disorders in their lifetime.

If this same property does have any water bore well or Water Sump towards Southwest part then it may be more chances for suicide tendencies or suicide or premature demises may be observed at this properties. If this Southwest street focus is found for a commercial property then there is a more chance for the collapse of business. 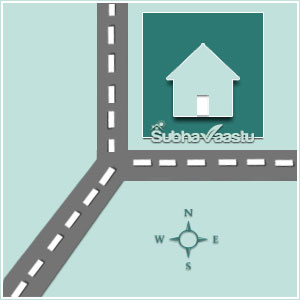 This house is having West (West vastu) and South (South vastu) roads and Southwest street Focus is also hitting the property. Such street thrusts have the malevolent effects of both SSW and WSW street thrust. It is similar to a man walking with a huge load on the head and having shackles on the legs.

Residents aware that Southwest is the exact another side of the Northeast, i.e., one corner is the Northeast and the other opposite corner is the Southwest corner, by having this knowledge we may easily understand that Northeast brings luck, happiness, peace, opportunities to the residents, then what will be the effects of Southwest, just opposite to the Northeast, it means bad luck etc, Northeast is the cause for the birth, so SW would be . . , if a resident is in the dilemma of buying such properties our strong advice is without experts vastu consultant should not take any decision, or otherwise, it may hurt you. Playing games with life is not recommended.

It is generally recommended that SW side of the house be such that as they be high construction or high level (such as mounds, hillocks, etc) this street thrust would be exactly opposite to the same.

It would rather be difficult to face the ill effects of such a street thrust. One may cross a lake or even an ocean but not overcome the consequences of SW street thrust

What Are All Evil Effects of Nairuthi Veedhi Shula

The evil effects of SW street thrust are :

2. Always feeling of losing something or other

4. Untimely death and at times murders.

5. Incurable diseases such as leprosy, cancer, heart ailments and the like.

6. Loss of children who would have come of age.

We urge the residents please consultant only the best expert vastu consultant before buying the properties, if you already bought the property then, show that property with one Vastu expert and get his proper vastu evaluation guidance and thereafter do the corrections if he suggests any.

Back to Southwest-south Focus
Next Southwest-west Street Focus
Comments
+6 #1 Is it harm to buy Southwest road thrust home? — Dhanu Nanda 2017-02-27 06:59
Respected Sir, I'm a very big well-wisher of you. Your significant tips have solved many problems in our family. The negativity we used to feel is no more and we are feeling a healthy environment. Indirectly your website has helped us like a family friend. We will be grateful to you for the rest of our lives. For the investment purpose, we are looking to buy a home, found one home that has Southwest street focus, in your website, you given information that, it may not be a good idea to buy Southwest road thrust home. To exchange ideas, is there any solutions or remedies for Nairuthi veedhi sula?, looking forward to hearing from you soon. Thanks a lot.
Refresh comments list
Add comment