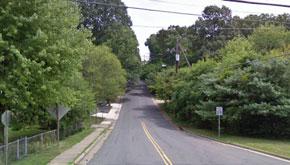 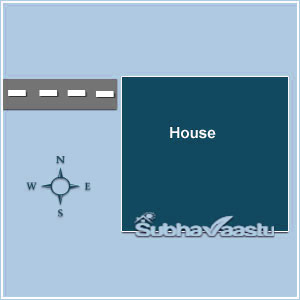 In this image one street is hitting a house, this street is called as Western Northwest Street focus or that house is called as Western Northwest street focus house. In some areas, it is also called as Paschim Vayavya Ghar or Paschima Vayavya Veedhi soola. Normally this kind of home bestows auspicious results. Several types of research say these properties enhance positive vibes and bright opportunities for the inhabitants. For example Pothys Shop in Parthasarathi Puram, T. Nagar, Chennai.

This Street thrust belongs to the benevolent category. In such a case having the house, Vastu Shastra compliant would greatly benefit

A unique feature of this street thrust is being successful in all situations, problems, litigations etc. These houses are specifically beneficial to some fields of sections in our society like politicians, advocates doing practice, real estate business people, law enforcing police officials, religious leaders and the like.

As often said it is essential that the house should be vastu compliant. For even though the benevolent street thrust does bestow its influence, when the house is not own malignant component too, with the result the residents would feel good at times and miserable at other times.

Further, there is every possibility of a situation where even when success is a natural phenomenon in a given situation it may even elude. 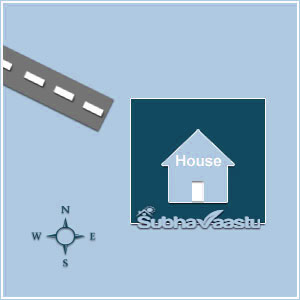 In this case we need to check what degrees this road focus starts and where it is hitting and what about home and many other points need to be checked carefully.

Only when the land or plot (plot vastu) or site (site vastu) is according to 90 degrees and having Western Northwest street focus then residents verify that property with one expert and later decide to buy or not.

Is this Western Northwest Road Thrust Considered to be Auspicious?

In this image the Street focus is hitting to the house at Northwest-west location, but this originate from West direction, so there is a difference in results from this road thrust. Hence, careful observation is required when we deal with street focus homes. Based on several factors we have to decide whether this is good or bad. If your searching home has this same feature, then it may not deem to be auspicious.

Is this Paschim Vayavya Veedhi Shula is Considered to be Good? 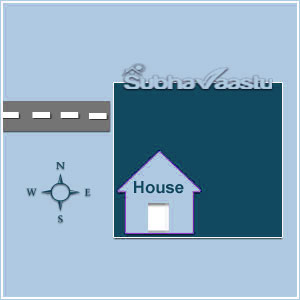 This house also getting WNW street focus and inside the boundary premises this home has huge East open space. This would be greatly beneficial to people in the political field and the like. North direction also this home has open space (in addition to that in the East direction) which would result in unimaginable good things experienced by the residents. Residents of such houses will succeed in their respective ventures or activities through this home located at this boundary premises and with this WNW street focus too. 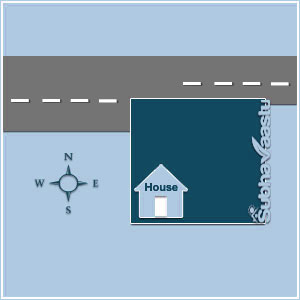 1. Natural Formation of Street focus 2. Street thrust happens consequent of encroachment or artificial road hits which happened only because of human efforts. Encroachment situations would invariably occur in northwest blocks, (here we have shown only encroachment, not in a Northwest block) If in such cases West direction side is at a higher level and East receding the benevolent effects would be far more than otherwise.

In all such matters, small modifications to the house construction would be greatly helpful for happy future. Normally, this focus brings cheers to the residents. 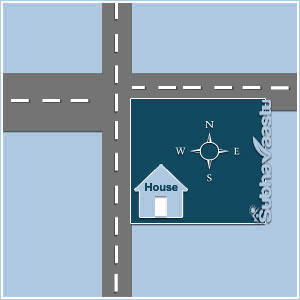 Please observe this image and the above image twice. Slight variation in between these two images. The above image Western Northwest street focus is more benevolent than this image focus. In this image one West road passing from South to North direction, we found some variation in results. Both homes have same measurements and identical quality and matching structure, but there is a dissimilarity in surroundings in the name of West road. Without consulting reliable Vastu pandit don't buy this home.

Is This Western Northwest Road Soola is Good or Bad? 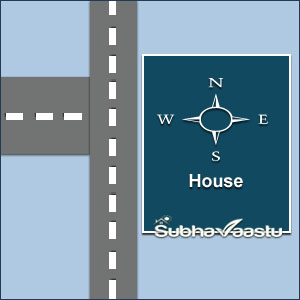 Some residents thought that if a home has West road and one Western Northwest road hit on that home is considered to be bad. As we discussed earlier normally, this Western Northwest street focus is giving auspicious results. Only a few are giving bad results based on other neighborhood effects or wrong internal Vastu. In this image a Western Northwest road is hitting this home, this is also considered to be good. This is also called a "T junction road". Please note that residents should be alert when arranging the main entrance door and the main gate. A small mistake may make them sleepless nights.

Is It Good to Split Western Northwest Street Focus Plot Into Two Plots? 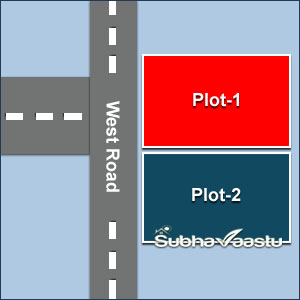 Normally the Western Northwest road hit giving quality results to the inhabitants. If they split the plot, both plots may be disturbed. Both plots may lose positive energies generated from WNW road thrust. If a resident split their plot into two, they will lose the benefits of Paschim Vayavya veedhi Shula's positive effects. Splitting the plot may disturb the nature of the WNW road thrust. Better to leave it as it is.

Let's check what happened if the plot is bifurcated, "Plot-1" got Paschima Nairuthi Veedhi Shula which may normally not auspicious and the Plot-2 does not acquire the benefits of the WNW focus. Both plots lose the benefits.

Humans should always hunt for extraordinary outcomes from their available resources, if they got any chance to have a good future they should not disturb it by doing wrong ways. If anything is needed without experts' advice don't bifurcate the plot/house.

This street focus subject has very depth knowledge. Residents should approach only expert Vastu consultant before buying the homes which have road thrusts.

Back to Vastu West Street Focus
Next NorthWest Street Focus
Comments
+15 #1 Northwest-west Veedhi Potu — Chandu 2014-12-15 07:52
Respected sir, I am Chandu. I have one west facing plot.that is dead-end plot and it having northwest veedhi potu. The Plot size is 38*50. The northwest road is 25 feet is it a good plot or not. Please reply. I am so fortunate to visit this website. It has a huge information and much better than any other portal. You are helping us by publishing facts of vastu science. Very kind of you sir.
Refresh comments list
Add comment