There is a great history for Madhya Pradesh. When we enquire with anybody about the good accent of the Hindi language, most of the Indians, first showing a triangle which is Indore, Khandwa, and Ujjain. We admire the Hindi accent of Ujjain, Khandwa and Indore locations. Very nice to hear their Hindi speaking accent. Somebody says Ujjain is the birthplace of Hindi. (Require citation.)

People of Madhya Pradesh are really good. They respect others. They know the value of tourists. They never wrong guided us. Thanks to Madhya Pradesh people.

Coming with Vastu Consultant services in MP, we have to accept that people are little compromise on the quality services. When coming with residents of Gujarat, they are always searching for best vastu consultant in India but where as some other parts of India, people compromise with the available services, though they know about the caliber of the available Vastu pandits.

Most of the business people in Bhopal always looking for famous vastu pandit services. This is indeed a good idea. We should not compromise in our life. If so we may compromise lifelong.

Many thought that Southeast facing house vastu may be disastrous, but when we selected a right plot or house, then this SE homes are also freely transfer good results.

In Vastu Shastra, there is no any of such good or bad, though most of the best vastu pandits in the society rejecting SW facing homes, but majority of the homes furnish with very good results if we followed exact vastu principles before buying these Southwest facing house vastu homes.

Need to take care of any kind of homes which may be Northwest Facing House Vastu or any other direction homes, we should thoroughly check and pick the right one. Then life become more peaceful and happier.

Some residents rush to buy North Facing House Vastu buildings without getting any expert consultancy and fall into the trap of wrong Vaastu principled homes. We should note that, either it may be East or North or West or South, the best possible way is we have to choose the right one, otherwise it may hurt in the future. 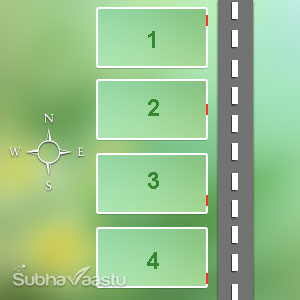 Some residents buying the East facing homes without any second thought. For them this image will definitely open their eyes. Observe 1,2,3,4 numbered homes in this image. 1 is considered to be good, as door came at Northeast which was shown with one small red line. 2 is also considered to be good, as the door came into East direction . 3 and 4 are not good homes because both homes door came into Southeast.

Madhya Pradesh, commonly known as “MP” is an Indian state located in the central part of the country. Central = Madhya. Due to its location in the middle of India, it is often called as “Heart of India”, "Bellybutton of India" etc. In terms of area, the state is the second largest state of India with covering an area of 305,252 kms. In terms of population, the state is fifth-largest with approx. 75 million inhabitants.

The state is rich in mineral resources and many rare minerals including gold, diamond, and copper. A significant part of the state is also covered by dense forests.

The area of modern Madhya Pradesh was the heart of ancient Hindu civilization, culture, religion, and traditions. Also, the area was home to one of the oldest civilizations and people. Archeological evidence like stone tools, pottery paintings, cave paintings discovered and unearthed in the area dates back to 30,000 BCE.

During the Medieval time in the 13th century, the area fell to the occupation of Delhi Sultanate.

Marathas availed this opportunity and took control of most of the MP. Unfortunately, it was too late and the British already had their foothold in the area. There were a number of wars fought between Britain and Marathas known as Anglo-Maratha Wars. After the defeat of Marathas in third Anglo-Maratha Wars, the British were the sole occupiers of the whole of India and all the states including Madhya Pradesh became princely states of British India.

The physical features of the state include dense forests, rivers, landscapes, plateaus, Doabs, hills, and fields. The state has also rich cultural heritage and this is the reason number of local and foreign tourist, historians and archeologists are interested in the state.

As the state is the heart of Hindu religion and culture, a number of ancient temples remain of old civilizations and forts can be seen throughout the state. Around 30% of the area is covered by forests. Also, the state has the most number of wildlife parks and reserves.

Before 2003 the economy of Madhya Pradesh was in poor condition but efforts by government and authorities had improved the condition of the economy and is now one of the best performing economies of India. The leading sector of the economy is the services sector. Agriculture sector also plays a significant role in the economy.

The major economic products are Soybeans, Grams, Oilseeds, Pulses, and Food Grains. The industrial sector of the state is well-developed and a number of Industries like cotton, textile, tobacco, fertilizers, chemicals, etc. active. Also, the state has six ordinance Factories and provide a number of arms to the Indian Army.

According to the 2011 census, the majority of the people of MP follow Hinduism and accounted for 90.89% of the total population. Minority religions include Islam 6.57%, Jainism, Buddhism, Christianity, and Sikhism. A number of languages are spoken all over the state, but the official language of the state is Hindi.

Also, Hindi is spoken by the majority of the inhabitants. Other common regional languages are Telugu, Bhilodi, Gondi, Korku, and Nihali.

Madhya Pradesh has a unique and beautiful culture. The state is famous for its folk, music, and traditions. A number of ancient temples and remains are found all over the state, some of which are declared as a world heritage site by UNESCO. 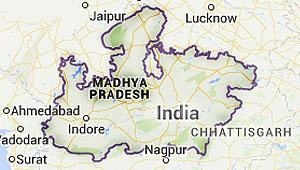 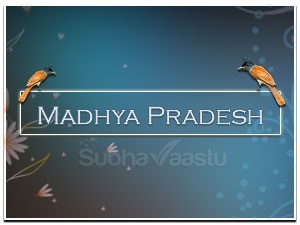