Montenegro is a sovereign country that lies in Southeast Europe. The country has mountainous terrain and is known for ancient towns, beautiful towns, valleys, beaches, and National parks. The country is a member of the NATO, Council of Europe and the World Trade Organization.

The regions of modern Montenegro were inhabited by different people from time to time. The earliest known people in the region were Illyrians. Ottomans also ruled the region for almost 4 centuries.

The country also suffered great losses in the World War 1 and was occupied by Italian forces in the Second World War. After the Worlds War 2 ended, the country merged with Serbia and Yugoslavia to form “Federal Republic of Yugoslavia” and remained till 1990, when eventually it broke up.

The country has distinctive geography and topology featuring jagged mountains, lakes, rivers, forests and protected wildlife. Some of Europe’s most individual species are found and protected in the country.

Services is the dominant economic sector of the country as agriculture and other activities can’t be done due to difficult terrain. Due to countless features, tourism is popular in the country and brings in a large revenue.

Christianity (Eastern Orthodox) and Islam are the main religions in the country. Unlike other European countries, Serbia, Bosnia, etc. where the conflicts broke out and Muslims were massacred, Montenegro has a symbolic religious unity and gives equal rights to all communities. 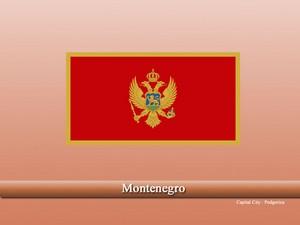