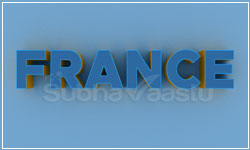 Finding exact vastu house is not easy in France country. But need to check the minimum requirements as per Indian Vastu Shastra. If the house is severe vastu defects then avoid buying the same and need to check the other home for Vastu evaluation.

In this home search, the genuine vastu consultant can recommend a right vastu home to the residents.

Without vastu pandits reference don't buy the home in France.

Please search for only the vastu expert who has great knowledge in foreign properties vastu.

When coming with vastu in France, need to observe many things and has to consider the neighborhood vastu support to the house and then only buy the home.

Please verify what is the direction of the house. 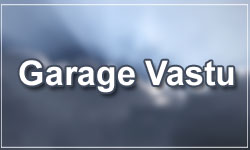 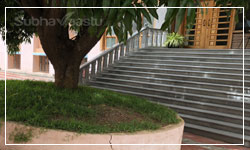 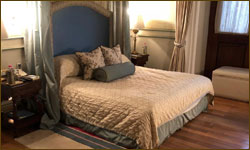 France, authentically the “French Republic” is an independent country located in Western Europe.

The country is one of the most powerful, developed and stable country not only in Europe but also worldwide.

The territory of France consists of the mainland and several other territories and islands worldwide.

The country has a long-term history of development and has contributed to several educational and experimental fields.

The country has also deep influence in terms of military, power, and politics and is known for its green landscapes, the capital city “Paris”, which is a symbol of love, old iconic café’s, French food, old medieval towns, wine, middle age castles, ancient remains, and farmhouses.

These features make the country unique and today, France is one of the most visited countries in the world.

The country has achieved milestones in every modern field either it is related to human development, economy, technology, arts, literature, philosophy, education, healthcare, or science. 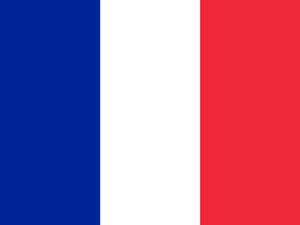 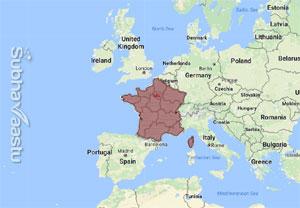 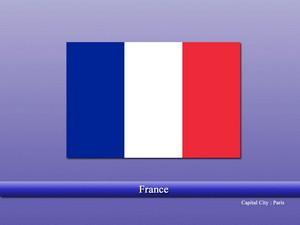 France has a long and complex history of development, colonialism, wars, and freedom.

Human activities in the region date back to approx. 1.8 million years ago. At that the conditions were different; the climate was really harsh and bitter.

The people of that time only relied on hunting. Evidence like tools, paintings, and remains also help the scientists to predict about the ancient people precisely.

Around 600 BC, the region was occupied by the Greeks and afterward the mighty “Roman Empire”.

The Roman Empire made the region as one of their provinces. Some of their marvels can still be seen today such as Nimes, Pont du Gard, Arles, etc.

The middle-ages of France were marked by several conflicts and reign of different Kings. Also, it remained in conflict with the British empire throughout the history and occupied or tried to occupied each other countless times.

The French people also participated in the famous “Crusades” along with the British and other empires.

During the 19th century, “First French Empire” under the one of the famous French General, “Napoleon Bonaparte” became one of the most powerful, and largest empires in the world.

Also, from 16th to the mid-20th century, France maintained colonies all over the world spanning from North America, Central America, South America to the Subcontinent, East Asia, and Africa.

During the First World War, France faced a major setback as 1.4 million French soldiers died and loss of infrastructure and military equipment was destroyed.

Similarly, by the start of World War 2, France was instantly occupied by the German Army and the French forces surrendered or retreated towards England.

This event is still remembered as one of the most humiliating in the French warfare history.

The German occupation remained till 1944 until it was liberated by the Allied and French forces.

After the War ended, France still maintained numerous colonies in different parts of the world but as the colonial era was ending, all of the colonies were given freedom.

Today, France has one of the most sophisticated armies in the world and is operational in Africa, operated in Iraq and Afghanistan.

It is also one of the most crucial contributors towards the NATO.

The country of France consists of the mainland, which is called “Metropolitan France” and several other overseas territories that are situated in the Indian Ocean, Pacific Ocean, Atlantic Ocean, and South America. These territories were once French colonies similar the else ones all over the world.

The mainland France borders Andorra and Spain towards the South and Southwest, Belgium and Luxembourg towards the northeast, Germany, and Switzerland towards the East, while Italy and Monaco lie towards its Southeast.

Also, the mainland France has diverse geographic features consisting of the famous “Alps”, mountains, Green valleys, landscapes, and forests. The country although, has the comparatively high population, but is one of the least polluted countries.

The government has taken effective steps and non-polluted ways the generate power. Another interesting fact is, France produces 75% of its electricity through the Nuclear Power which is cheaper and pollution free.

France has a 6th largest economy in the world. Also, the economy is stable and diversified based on several sectors. Some of the main economic sectors are Industries, agriculture, tourism, technology, medical services, military equipment, energy, and services.

The industrial sector includes chemicals, manufacturing, textiles, IT equipment, military hardware and technology, textiles, shipbuilding, aerospace, and research. Agriculture is thriving in the country form the ancient times due to suitable soil and favorable conditions.

The agricultural products of France are renowned worldwide and are known for their quality and uniqueness. Also, France exports its military equipment to various countries. Tourism is also regarded as one of the major contributing sectors towards the economy. 83.7 million tourists visited France in 2014 alone.

French is the primary and official language of the country. Also, due to French colonies worldwide, today French is being spoken in several countries like Canada, North Africa, and Central Africa.

Islam is the second largest or minority religion accounting for 5.6% of the total population. Several other religions also do exist in the country. Also, the modern French people are decedents of the following ethnic people; Celtic, Roman, and Germanic. Mass immigration, especially from the African countries have also changed the shape of the French demographics to some extent.

The Hundred Years War in between England and French was a continuing series of fights from 1337 to 1453. An unbelievable loss for both countries with these conflicts. Normally, war always creating a financial loss to both participants.

Back to Vastu Expert Finland
Next Gabon
JComments