Indians are very less in Kyrgyzstan country. Nowadays many foreign nationals had much interest in Vastu Shastra and most of them were practicing Vastu principles and doing corrections as per Vastu Consultant guidance. This is a great change in our society. Thanks to everyone who starts a new life mix with peace and development.

There are fantastic principles in this Vaastu science which makes us happier in the life. Do start following those principles with the help of Vastu Pandit only. One should not do practicals with half knowledge. It may finally damage the entire situation.

When the resident requires, there are many genuine Vastu Expert who are working for the welfare of the society, they can guide properly. Please do follow only with the Vastu Specialist. Don't reach charlatan in the society.

The location of the country has great strategic importance as the ancient “Silk Road” passes from the country and is famous for its scenic beauty, Nomadic tribes, wildlife, ethics and old traditions. The country is a member of the United Nations (UN), Organization of Islamic Cooperation (OIC), Turkic Council and the Eurasian Economic Union.

The ancient history of the country is not well known. One of the earliest human records found in the region dates back to 2,000 years ago and were Nomadic people that roamed the region and were mostly dependent on cattle. Also, due to mountainous terrain, the region was difficult to be approached and remain isolated from rest of the world.

This helped the local people to live peacefully and their ancient culture remained preserved. Before the arrival of Mongols, the region was ruled by different empires most notably Uyghur Khaganate and the Kyrgyz state. As the Mongols arrived, the region peacefully became part of the Mongol empire.

Later periods of the region were marked reign of different empires and Khaganates including the infamous “Qing Dynasty”. By the end of 19th century, Kyrgyzstan was annexed by the Russian empire after the “Treaty of Tarbagatai” between China and Russia.

Also, this event was opposed by local tribes but was powerless to take any action. Things become worse after the Russian Civil War as the country became part of the USSR and was known as “Kirghizia”. The country remained part of the Soviet Union until its dissolution in 1991.

Kyrgyzstan is a mountainous country with high mountains and glaciers. No doubt the country is just heaven on earth and has numerous heart-touching views, landscapes, lakes, green lands and eye-catching sceneries.

In between the mountains, there are some valleys which are green and can be used for agriculture also. Due to extensive glaciers, water supply is abundant in the country and streams can be found all over the country. Some of the environmental problems of the country are deforestation, overgrazing, and mudslides. The temperature in the country varies with the heights.

Agriculture is the most dominant economic sector of the country followed by Services and Industrial sectors.

Due to mountainous terrain, the land mass available for agriculture is very less but still, it produces and exports some best quality like cotton, tobacco, wheat, sugar beets, potatoes and other numerous fruits.

In addition, the country has large reserves of precious metals including gold. Gold is also the largest export item of the country. Oil and gas reserves in the country are negligible.

“Kyrgyz” is the largest ethnic group in the country accounting for 63% of the total population. Other ethnic groups include Russians, Uzbeks, Dungans, Uyghurs, Tajiks, Kazakhs, and Ukrainians.

Although the country has declared no state religion, Islam still has a significant influence on the politics and other daily life activities of the country. 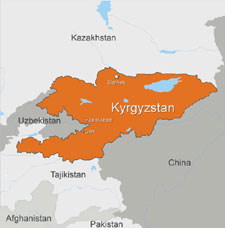 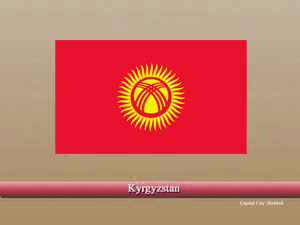 Back to Vastu Consultant Kuwait
Next Laos
Add comment
JComments