Vastu in British Columbia [BC]:

Traditionally, Vastu would refer to the general wellbeing of individuals in an enclosure, or where they are, or the family works for a daily living. That’s why currently, Vastu Shastra science has been immensely and intensively applied in the construction of houses all over the world and focusing on targeting all races of people.

As we discuss this topic in depth in this chapter, we’ll pose a question; Who really doesn’t want to live long? we are very sure, out of 1000 people, none of them will stand to say, “for me, we want to die early, life has become difficult”.

Even those who are in Hospital suffering chronic diseases and their doctors have told them, “your cancerous tumor has now become uncontrollable, so you have only 1 month to live in this world”, will tell you they still have hope to live, and thus their God is in control to disintegrate the tumors and render them free to continue with their life.

It’s the case here, as you’ll realize Vastu consultancy will mainstream anyone who’s willing to build a house to build for the wellbeing and prosperous life of the inhabitants leaving there in.

Nevertheless, for those willing to buy homes and flats for living with their families, the consultancy gives the guidelines on which conditions of topography and climatic aspects should they consider to avoid adverse effects of climate-related illnesses and natural calamities.

In this case, we’re discussing the new series of Vastu consultancy in Vancouver. To find out how the inhabitants of this region can turn their architect behavior, for the goodness of their lives.

Just in a nutshell, British Columbia is a western state of Canada. We have some clients in Vancouver. Indeed people are good and generous, very smooth. They are broad-minded and easily understand what we are expressing vastu advice to them when they are planning to buy home.

As the climatical conditions are extremely pleasant, people may also experience such pleasantness. They taught with us like their close friends, though we are very new to them. Great land.

When residents in Vancouver city looking to buy a good vastu home then has to take some precautions.

Try to buy a home when it has South hilly areas.

When there are pinnacle mount land elevations at West direction, then residents may buy such plots or houses.

Don't buy homes when it has Eastern hillocks or foothills.

Don't buy houses when it has butte hummock at North directions.

At any cost don't buy the home when it has mesa gradient ridges at Northeast corners.

Find Home which had drumlin elevations at Southwest directions. If residents find any of such homes, first contact one vastu consultant and buy.

British Columbia is a cold location, so water storage may not be all the year appeared at water bodies. Anyway, we will discuss waterbodies effects below.

When there is a water body at South, then postpone buying the home.

When there is water body at West side then suspend buying and search for other good vastu homes.

When there is water bodies at East direction, this could be auspicious.

When there is water bodies at the North direction, it bequeaths the positive energies.

Water bodies towards Northeast is excellent.

Water bodies at Southwest direction is not at all safe for the home.

British Columbia is a Canadian province located in the westernmost part of the country. The province is 5th largest Candia territory/province and 3rd most populous. British Columbia is known for its untouched beauty, mountains, natural areas, natural parks, ski resorts, winter sports and the city of “Vancouver” which is home to Canada’s film industry.

The regions of what is now British Columbia have been inhabited by the Natives for thousands of years. It is estimated that the first humans arrived in the region 15,000 to 20,000 years ago.

We can only predict the history of these people as recorded history is not available. Oral stories told by the natives and archeological discoveries help us a lot.

Earliest of these people were hunter-gatherers but as the time passed, those people learned food-gathering and agricultural techniques. At the time of European arrival, several Native tribes were present in the region and spoke over 30 languages.

Europeans also carried several diseases with them which tremendously affected the Natives and their population drastically decreased. The first Europeans to discover the region were Spanish and European explorers sailing under the Spanish crown.

Spanish made a temporary presence but were soon overran by the British due to their Naval and Military superiority. The regions were explored by several famous British explorers including “Captain James Cook” (British Naval Officer who discovered some parts of Australia) and George Vancouver.

British Columbia has a long coastline and the only Canadian province that borders the Pacific Ocean. The province consists of the mainland and over 6,000 islands. Very few of them are inhabited.

Bordering provinces and territories of British Columbia include Alberta towards the East, Yukon Territory and The Northwest Territories towards the North, while its borders four American states which include Alaska towards the West and Montana, Washington and Idaho towards the South.

British Columbia is just a heaven of the earth with many beautiful and astonishing features. There are several mountains, beautiful lakes, long coastline, forests, national parks, marine parks, and ecological reserves.

Although the state has some amount of population as compared to other Canadian provinces, its population is highly centralized living in an urban area and cities.

This is the reason the majority of its areas are free from human activities leading to the healthy population of wild animals. Many of the species that got extinct or are in danger in rest of the Americas have good numbers and living safely in the region of British Columbia.

The service is the largest economic sector of British Columbia. Other main sectors include transportation, education, film industry, agriculture, and finance. Due to mountainous terrain, only 5% of the province area is available for agriculture. 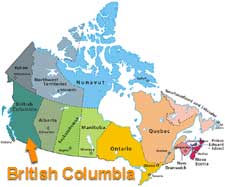 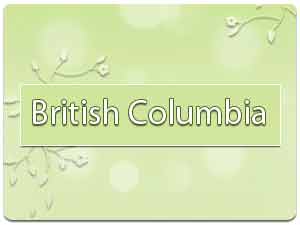