We have very less clientele at New Brunswick territory in Canada. We can count them on fingers. But we got many clients in Maine in USA. It seems to be there may be less NRI's or residents are hugely concentrated only at other parts of Canada like Ontario, Alberta, Manitoba etc.

When residents trying to buy home at any city in New Brunswick then it's best to take vastu consultant recommendation before buying it. This could be the safe method before buying the home. Generally, vastu expert first observes many things and guide the residents to buy or not to buy.

Humans are present in the region of modern “New Brunswick” since 7000BC. Mi'kmaq, Maliseet, and Passamaquoddy were some of the earliest nations of the region.

It is also predicted that Viking also explored and established a permanent colony in the region around the 16th century.

Lather during the European exploration, the region was one of the first places of North America that were settled by the colonists. The city of “St. John” was the place of the first settlement and was done by the French.

The French also built several forts to enhance their defenses as hostilities were increasing in Europe. Subsequently, French were defeated in the “Seven Years War” at the hands of British and region became British territory.

Also, during the time of “American Civil War”, many British loyalists migrated from the US and arrived in the region. On 1 July 1867, the New Brunswick along with other colonies or territories joined the “Canadian Confederation” and became a single country.

New Brunswick has a relatively very small covering area if we compare it to the other gigantic Canadian provinces and territories which are larger than many countries.

Main features include mountains; most notably the “Appalachian Mountain Range”, rivers, low lands, valleys, and highlands. Majority of the province’s land is covered by forests and this is the reason the province has healthy wildlife. Some of the species include Canadian Lynx, black bear, white-tailed deer, and moose.

Agriculture, forestry, fishery items, mining, and tourism are the main economic sectors of the province. Cranberries, apples and maple syrup are some of the primary agricultural products. “McCain Foods” is one of the world largest producers of frozen potato products and is located in the province.

84% of the province’s residents adhere themselves towards the Christianity. While 15% are non-religious. English and French are the primary and official languages of the province. 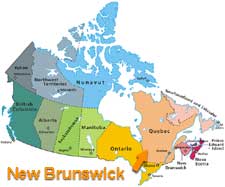 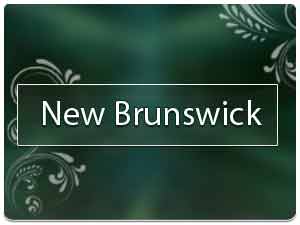