We are very happy to learn that by sheer self-efforts you have gone to USA and made a successful living. From our side, we wish you all well and expect that you will prosper further. Our endeavor is to help you to achieve this aspect as early as possible in life. You are aware that vastu science helps the residents a lot in this regard.

We have also of late observe that many of the Indians settling abroad wish to ensure that their residences are vastu compliant. This is a positive sign. Towards this end, such people refer the cases to their friends and relations in India and expect that they would be giving professionally a sound advise.

Kindly note that though such people seek your emotional happiness, they may not be professionally competent to do so, yet they would be advising you only out of love and not of competence. This puts both the advisor and receiver in a bad spot. You will get an emotionally charged advise and not backed by sound knowledge.

Do you think this is adequate? Definitely, not. The fault lies in you and not them. You must be very specific while seeking such advice as to whether the person concerned has requisite vastu knowledge and experience or not.

You will be spending your life’s savings in procuring a living premise and furnishing it appropriate to your status and likes. In the process, you would have spent a large portion of your earnings. Maybe about US Dollars 2000 thousand or 3000 thousands or so. Is it not wise to spend a few dollars and receive a professionally correct advise so that you do not regret later for the poor decision you have taken.

We have seen cases where people are prepared to spend a large amount of money on even doormats, but not on vastu professional services.

Infact it is surprising that unskilled labor working in Gulf countries are seeking genuine vastu services from best vastu experts only so that their family members at home lead a happy life. Sad, such wisdom is lacking in otherwise educated and qualified personnel from USA and from other western countries.

It is laughable but true. Many NRI’s are looking for vastu consultant and they expect vastu expert services at a price of 5 USD or 10 USD ONLY. This is a tragedy. When a resident pays less, the resident gets poor advise. Think of this intelligently.

It is for this reason that we urge to be wise and seek a competent vastu pandit and pay him at his standard. He is a responsible person and is concerned about his name and status and so the resident would not be harmed under any circumstances.

The fact that the resident is seeking vastu advise itself means they are looking for a reliable and competent person. The person concerned takes great care in every matter. He would rather work for free than reduces his fees. If anybody is coming at a low fee, it means the advice may be cheap and may not be professionally comprehensive.

A pragmatic resident seeking vastu advise would not compromise on the status of such advise. He should be prepared to pay the appropriate fees for such a high level of competence. We are sure that the educated NRI’s would appreciate this aspect and act wisely.

You are buying a home in USA, so the properties, their construction, system, style are different than Indian system. This vastu shastra discovered in India and it was generally ought to be used for Indian properties. Without doing researches on the properties in other countries, one should not come on one decision on other country properties.

Coming with USA properties, the system of construction is different compared with Indian constructions.

USA homes were not built with complete steel, cement, concrete, sand etc. Generally, your homes built with wood. Partially cement is used only for car garage unexcavated area construction that to use more cement if there is a basement.

Sharp intersection and corner intersection is very most important in street focus results. Further, in USA, the homes are built like this way. Road, sidewalk patch, lined grass, sidewalk (pavement) and double lined grass and open space and thereafter “home” and finally backyard. This is the system in USA.

When the road is focusing any property, automatically the above system also follows with road and it also gives its focus to the same property. The results may be a little unusual.

In the future the “the focus after the road” i.e., “sidewalk” may be lost its focus levels and may disappear only because of trees development. If trees are not planted and not grown, then the focus from this sidewalk remains the same.

North Carolina is a US state, located in the Southeastern zone of the country. The has diverse landscapes, and features including mountains, beaches, barrier islands, forest, rivers, and lakes.

In terms of area covered, the state is 28th largest and 9th most populous US state.

The regions of North Carolina are inhabited by the humans for thousands of years.

At the time of European arrival, some of the tribes living in the region were Chowanoke, Roanoke Cape Fear Indians, Waxhaw, Waccamaw, and Catawba.

Spanish explorer “Joan Pardo” was the first European to discover and claim the region. He also contracted “Fort San Juan” to strengthen his presence.

The British maintained a hold in the region until the “American Revolution” when the colonists demanded the British withdraw. During the “American Civil War” period, North Carolina allied with the Confederate states. Although very few battles were fought in the state, but the state contributed much manpower towards the war effort.

The state has three distinct geographic features, Atlantic coastal plains on the East, Mountains (Appalachian Mountains) towards the West, while central region also features plateaus and plains. Flora and fauna of the state are also rich. You can view countless hear touching landscapes and sceneries all over the state.

The economy of North Carolina is balanced and diversified. Major economic sectors include agriculture, industries, finance, and services.

English is the primary language of the state. while languages other than English include Spanish, German, French and Chinese. Protestant (a Christian sect) is the largest religion of the state. Minority religions include Catholics, Mormons, Eastern Orthodox, Jews, Muslims, Hindus, and Buddhists. 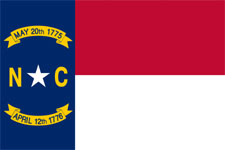 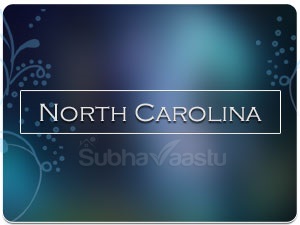